The Center or the Bramhasthana

It is self-evident that some buildings live beyond their time in the elegance and beauty of their proportions even when they have been irreparably damaged, vAstu shAstras deal with the design and application of form in space.  A residential building, temple, school, town or village, palace, chariot, chair and sculpture piece, are all dealt with in the vAstu shAstras.  In contemporary terms vAstu would pertain to the built form, its relationship to the occupiers and to the natural environment.

In every aspect of the Indian creative processes, the central point of the space or form has been given great prominence.  In dance and the music, the dancer/ musician is taught to bring energy from the ‘nabhi’ (navel) for his/her movements/ voice and in building design the entire built form must emanate out of the centre.
The Indian tradition has many other day to day examples like the dress for women called Saree or Sari being designed in a manner that the center of the body, the nabhi is left open and free.

The central point is known as Brahmasthanam and the energy field of the built space is collected here, all ready to be drawn forth into the surrounding living spaces.

In the center the Bramha resides who is the anchor of stillness and repose, and the nexus for the entire cosmic movement. The traditional home left this Brahmasthanam or country yard uncovered and allowed the outer energy to constantly replenish the inner.

Why leave the center open and its application in different types of built form?

The centre is the most powerful and offers great benefits to the built form when left open so that cosmic and earthly energies can constantly replenish each other. In a settlement this can be a maidAn or park, or natural forest, or a spiritual centre. A less crowded centre is better for the settlement. In a house it can be an open courtyard or the urban alternative for the same.

In temples, the center of the garbha-gruha is very potent. The lingam is allowed to be placed at the center because it is formless. All other gods are placed behind the center. Mahavira and Buddha are closest to the human form- hence they are placed farthest away from the center.

The space enclosing the Bramhasthana or Bindu is called Bramhapada. It is only after comprehending the centre can the designer move into the design of the form.  The still centre evolves into the vibrant form. To build on this centre, or to place a barrier on it is like stifling the creative centre of the human being.  The benefits of allowing the centre to be open to environmental energies is an increase in the well-being of the occupiers.  The closing of it would be to prevent constant replenishment to the occupants which may over time lead to health problems.

How to incorporate this into the urban reality?

In our urban reality this would not be possible for most of us.  The alternative is to leave the energy point unbuilt (neither with a column nor wall) and allow the space to mingle freely with the entire built form. The alternative for an open courtyard can be a clerestory or just a space empty from any heavy structure or furniture. Keeping the Bramhasthana light allows a smooth flow of energy into the space. 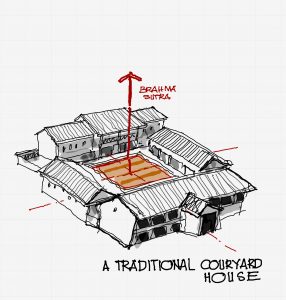 In an existing building when this centre is blocked, how does one free it?

One way is to remove the obstacle, but if it is a structural element, then an opening may be made at its top level.  If this too is not possible, the blocked energies could be slightly mitigated by placing a medicinal plant like ‘Tulasi’ in a niche in the barrier. Furthermore, planning can be done in order to shift the center of the building and in turn change the energy movement into the built space.

Bramhasthana for the Building & for the Site

The geometrically diagonal center point of the site is the Bramhasthana of the site and similar point for the building is the Building Bramhasthana. If the two coincidences the energy at that point or bindu is highly potent and hence it is advised to coincide these points only in religious buildings. For all other buildings it is necessary to see that the two points do not overlap. A connection between the two could be established through design, form, function and aesthetics.

In yoga, there are several methods that are recommended to the seekers for attaining well-being and serenity, similarly in vAstu there are multiple ways in which the designer and occupant can create a space for experience.  Within the manifested form many focii could be established in a space meant for many people. These centres can be in the form of open spaces, common gathering spaces, filled with herbs, healing plants and sacred water, or a religious centre. This would be suitable for a place of learning, worship, manufacturing and research centers. But if the space has a specific activity, then gathering all energies into a single centre proves to be more powerful.

In the shifting centres, the relationship of each to the main centre (brahmasthana) should be constantly clarified.  This connectedness would bring about the integrity and vitality of the collective space.  It can be carried out in many ways and in multiple patterns. Each of these configurations would create its own energy patterns and therefore give a definition to the collective spirit.  Harmony can be achieved when an inherent order is built into the patterns through numerical rhythm and proportions.