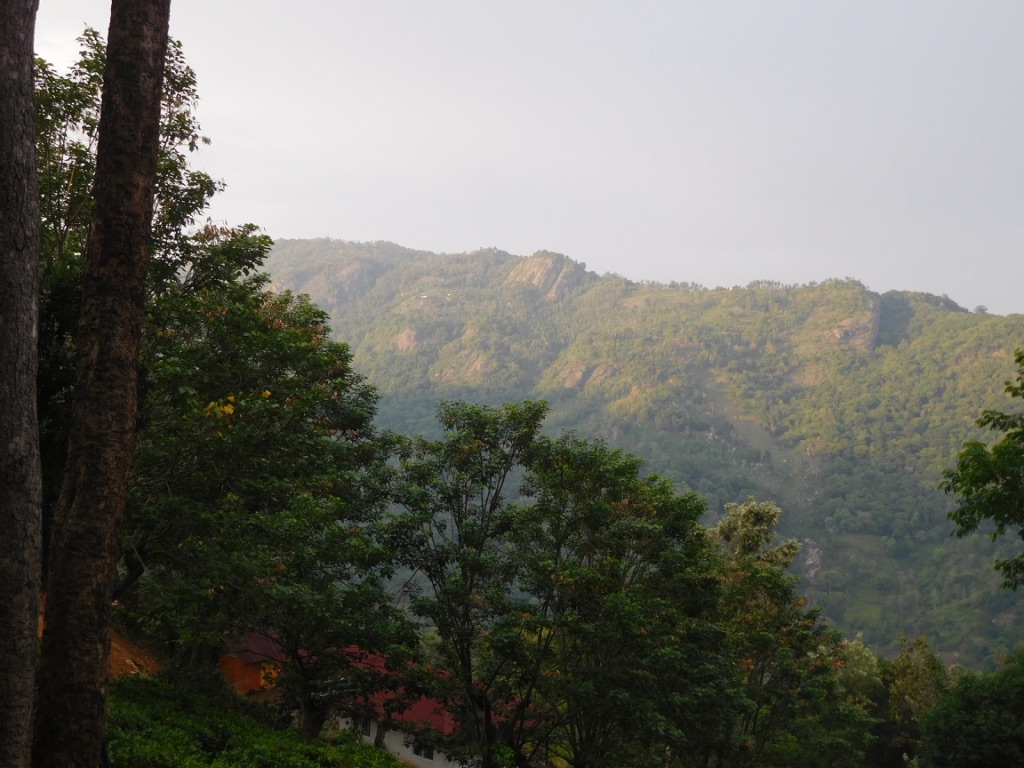 Article by Dr. Nandini Murali, a participant of Mahabharata Exploration Online program. Dr. Nandini is a Communication Professional, Author and a Researcher in Indic Studies.

As a  seven-year-old, I sat under the mango tree in our home with my grandfather, as he helped me read aloud from C. Rajagopalachari’s retelling of the Ramayana and Mahabharata. A daily morning ritual for several years, it was my introduction to our Itihasa-Purana tradition. While both epics fascinated me, the Mahabharata had me spellbound. Interestingly, several decades later, I re-engaged with the Mahabharata in a dramatically different way.

Recently, I participated in the Mahabharata Exploration, a ten-week online offering, elegantly co-facilitated by Anita Balasubramanian, Kavitha Elango and Hariprasad Varma—yoga therapists, and members of Ritambhara Acharya Sangha,  a group of seeker-teachers affiliated to Ritambhara Ashram. Nestled amidst sylvan surroundings in the Nilgiris, Ritambhara is a community of sacred activists from diverse backgrounds who explore alternate ways of being and living as part of a quest to live a life of meaning and purpose.

A group of 24 seekers, each one so different, yet so similar in our quest for inner transformation, met every Thursday at 8 pm for an hour and half for ten weeks. The virtual space gradually transformed into a subliminal sacred space as we began to explore the Mahabharata as a mirror to understand ourselves and our inner reality. What can the Mahabharata offer to look at ourselves; to discover hidden parts of ourselves that have either been banished, exiled or simply buried under the rubble of mindless living on autopilot?

True to its promise, even our first session began with three apparently simple but challenging questions that elude knee jerk responses: Who am !? Where am I? Why am I here?

“Our approach at Ritambhara, based on the tradition and teachings of Yogacharya  Krishnamacharya and Shri T.K.V. Desikachar explores the convergence of Itihasa-Purana tradition and inner work (antaranga sadhana) through dialogue and contemplation as described in the Yoga sutras. We use the stories in the Mahabharata as a mirror to engage in dialogue and contemplation to do dharana on the mind. The stories evoke us; cause a churning in the psyche (manthan). In this intense process, we  experience the story, touch the rasa (essence) and discover the inner deeply self-aware space (shantam) from where we can view our inner drama,” explained Anita, Kavitha and Hari.

Throughout the  sessions, the focus was on evocation or feelings, memories or ideas the story evoked  in our conscious minds. As we  engaged with several episodes from the epic, clubbed together as the Pandava archetypes—Yudhishthira, Bhima, Arjuna, Karna, Nakula, Sahadeva and Draupadi stories—we began to engage with them not  intellectually  but experientially. We were sent a story every week before the class. For instance, we began with the Sabha at Jayanta where Shakuni and Duryodhana plot to entice the Pandavas to a diabolical game of dice. Hence  it demanded that we engage with the story not from an intellectual  or cognitive space.

“Therefore, what is important is not the story or its interpretation or analysis as such. But the meaning one makes of it, because this meaning reflects me, who I am,” the facilitators said as they laid out a tentative road map for our inner exploration.

It was liberating to be freed from the tyranny of the rational, logical brain. Instead we were now being challenged to respond viscerally, tuning in to our intuitive intelligence and an embodied way of knowing in relating to the stories.  For instance, I read the  Jayanta story not once but several times. It required tremendous focus and a tuning in  both while reading the story and after. Often, the evocation would not be instantaneous. Journaling or writing  in a free associative manner about  what I had just read helped me connect deep within. Often, what was evoked could be a word, a thought,  a symbol or image. The stage was set for  each of us in the group to  explore individually and collectively how we discover, connect and express archetypal energy patterns to heal and transform ourselves.

We were also encouraged to allow the characters to speak to us in multiple ways without stereotyping, reducing or pigeonholing them. I felt humbled to glimpse in me the jealousy and envy that Duryodhana feels at another’s success. It was a shadow moment.

Shadows, in the human psyche, are qualities in ourselves that  we have disowned, rejected, exiled from our psyche and refuse to acknowledge them because they are regarded as negative or undesirable qualities. Duryodhana was no longer just a character; an antihero or villain. He existed within me as an archetype or energy pattern.

Confronting my inner Duryodhana was an ‘aha’ moment for me. Now that I had just acknowledged the Duryodhana archetype within me, could I give myself permission to look at the pattern with compassion and curiosity and not harsh judgementality? Could I permit myself the time and space to integrate this pattern lovingly into my consciousness without hurrying to hide it, fix it, fade it or get rid of it?

“Itihasa and Puranas help us map our inner world. They reflect the yogic ideals  of continuous investment in one’s competencies, inner well-being and holistic health through stories that illustrate how the human mind perceives and responds. The Mahabharata is a yoga text that is a repository of archetypes and dilemmas in human contexts.

These are intensely human stories that although written more than 5000 years back, is still new. The root of the word Puranam (pura api navam) itself suggests this old-yet-newness. The word Itihasa suggests ‘Wow! Is that the way it was?’ and creates a sense of wonder in the reader or listener. It’s the way we read the Puranas that makes it nascent or new,” explains Raghu Ananthanarayanan, co-founder Ritambhara.

Raghu has delved deeply into Bharatiya Knowledge Traditions such as Yoga, theatre, dance, art and contemplative conversations to evolve a one-week residential  experiential offering known as the Mahabharata Immersion. The Mahabharata Exploration is an abridged online version of the residential programme.

According to Raghu,  contrary to popular perception, the Puranas are not designed to enable readers or listeners to emulate the characters. Instead they have the potential to excite the reader or listener that leads to identification (Can I be like this?), spur an immersion in the character, which can then lead to self-mastery.

Human life is an interplay of archetypes that are expressed either appropriately or inappropriately. How do I engage with  the Mahabharata to get in touch with my archetypal energies?

Every archetype had embedded within its opposite. For instance, when I looked at Yudhishthira, I resonated with his ability to  respect  and uphold traditions and rules. However, like him, I too get trapped in  self-righteousness and rigidity. Similarly, Bhima’s passion and  his connect with challenges resonated with me, as his impulsivity and absence of forethought.  Arjuna’s ability to integrate the masculine and feminine aspects of the psyche was delightful, as his authenticity and courage in asking profound existential question, “In doing what I am doing, what am I really doing?”

Like Nakula, I am giving and compassionate, but also fail to replenish myself. Like Sahadeva, I enjoy engaging with challenges and knowledge at an abstract level, but  sometimes also get  trapped in intellectualism and lose my ability to be pragmatic. Draupadi’s resilience, her sharangati (absence of resistance  to the Divine) and ability to confront people and situations is also in me, but like her, sometimes I tend to forget that  no action is consequence-free.  Like Karna, I too have  admirable skills, but like  him, for several decades I was  entrapped in victimhood and held on to a disempowering  notion of vulnerability.

Each of these archetypal aspects plays out relentlessly in  our lives.  Some of  us may have an excessive engagement (ati yogam)  with one of these propensities; insufficient (hina yogam) or absence of engagement (viyogam). Awareness of these imbalances is a first step towards  integration of archetypes that results in inner harmony.

Each character was a mirror that helped me see myself clearly, once the layers of dust and debris began to cleave  even ever so slightly. The archetypal energies embodied by each of these characters  is universal and gender inclusive. Thus, each of us contains  the polarities of  the daivic (heroic) energy (represented by the Pandavas) and the asuric (shadow) energy (represented by the Kauravas) as also the daivic and asuric aspect of each Pandava  character.   Can I step back and look at all parts of  myself  with attentiveness, curiosity and compassion and hold them tentatively? Can I step back and look at the narrative I am creating about myself and the world and ask myself, “In doing what I am doing, what am I really doing?”

The exploration enabled me to  realise that  each of us is equally capable of behaving in a heroic or diabolical manner. If I don’t behave like the Kauravas in a situation, it because of viveka (discrimination) that leads me to make conscious responsible choices—choices that  make all the difference if my life is lived  meaningfully and purposefully—either in Kurukshetra (battlefield) or dharmakshetra (a sacred space). Each of us is a work in progress… on a sacred quest of becoming the best  versions of ourselves… imbued with the fragrance of rasatmika (full of  joy) and excellence.

Note: This article was originally published in the Hindu Post on 30 July 2020. Link to original post: Inner Transformation Through the Mahabharata